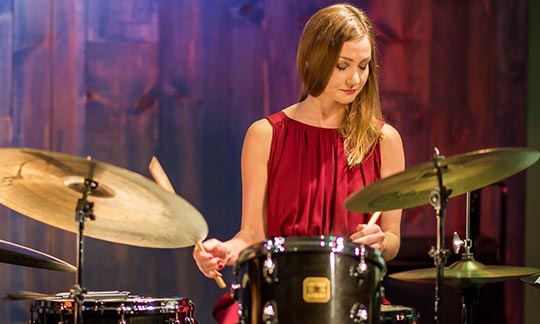 Tina Raymond’s highly praised debut CD Left Right Left is a musical journey through the American Progressive movement. Raymond conceived of the project in the aftermath of the 2016 presidential election. The frustration that she felt in the days that followed quickly turned into a desire to act, using her music as an expression of resistance.

Since moving to Los Angeles in 2008, Tina Raymond has been steadily building a reputation as an inventive, first-call drummer. She’s shared the stage with many jazz luminaries including Bobby Bradford, Bennie Maupin, Emil Richards, Art Lande, and Vinny Golia. She can be heard on several albums, including Cathlene Pineda’s “A Week’s Time,” Jon Armstrong’s “Burnt Hibiscus,” and “The Harold Trio,” also featuring Amy K Bormet and Biggi Vinkeloe.

She is currently a full-time professor of music at Los Angeles City College in Hollywood, CA, one of just a few women throughout the country who have a full-time faculty position in jazz. Besides being a mainstay on the Southern California jazz scene, she performs, adjudicates, and presents workshops worldwide at a variety of venues, festivals, and conventions.

Raymond is endorsed by Sabian, Regal Tip, and Remo.